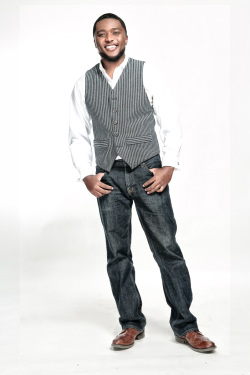 Gospel Singer, songwriter, musician, Brandon Mitchell is a native of Benton, MS.  Brandon, one of 6 children, grew up in church. “My earliest memories are of church,” says Brandon, “my father is an A.M.E. church pastor who’s been in ministry for thirty years. He also co-founded a quartet group, The Benton Jubilees, who have been singing for over 30 years. So ministry was always a part of my upbringing”. Growing up as a Methodist PK,

Brandon went from church to church with his father’s ministry singing and playing piano. He began to further his musical ability at Yazoo City High School under the direction of Rev. Steve Dennis, the school choral director. Brandon sang tenor in the varsity choir all four years of high school and first tenor in the boy’s quartet for 3 years. During his high school tenure, Brandon started the Yazoo City High School Gospel Chorale. This group allowed Brandon to use his gift of music to minister to youth throughout the school, and give other young people who weren’t involved with church or other extracurricular activities an outlet at school.  Brandon’s musical abilities earned him scholarship offers to colleges all over the country, but he chose Alcorn State University.

At Alcorn State University, Brandon Mitchell majored in Music Performance and toured the country with the Alcorn State University Concert Choir singing with them at venues such as Carnegie Hall and the Church on The Hill in New York. Brandon was also a featured vocalist at the Natchez Festival Music where he sang annually at their " Songs of the South" event, during their production of "Treemonisha" the opera, and multiple masses. During his tenure at Alcorn, Brandon founded Singers With A Purpose with a group of college friends on the campus. Since their conception, they have ministered throughout the country spreading the good news of Jesus Christ. Brandon Mitchell and S.W.A.P.  self financed and recorded their debut album "I Feel A Move" in April of 2008. This album was released in July of 2010. The group is currently working on the sophomore project with producer AyRon Lewis. Brandon also is an up and coming vocal producer with J.S. Productions.